Headline Bioethics: The balance of safety in publication of H5N1 research

Summary of story: In the period 2003–2011, 566 cases of people infected by bird flu worldwide were reported to WHO (2011), with 59% of the cases being fatal. The virus has been known to infect people since 1997 (Grady and Broad, 2011), but only through infected birds, and not via person-to-person transmission(Yong, 2012b). Herfst et al (2012) and Imai et al (2012) mutated H5N1 to see if it could acquire the mutations necessary for airborne transmission between ferrets (considered a good model for humans) in the wild. This research was due to be published in the journals Nature and Science, but the National Science Advisory Board for Biosecurity (NSABB) asked the journals to delay publication, and recommended that key methods should be omitted (Grady and Broad, 2011) due to fears of the virus being released “by error or by terror” (Keim, 2012) and the “potential risk of public harm to be of unusually high magnitude” (Berns, 2012). Eventually in March of 2012 the NSABB agreed that the two papers should be published in full (Yong, 2012a). The video from February 2012 reports on the decision to delay publication.

Discussion of ethical issues: The decision about whether or not to publish details of the process by which H5N1 could be render easier to transmit is a good example of a dual-use dilemma, defined by Atlas and Dando (2006: p276) as “the generation and dissemination of scientific knowledge that could be misapplied for biological weapons development and production”. Kuhlau et al (2011) argue that if a dual-use technology poses a legitimate threat, the science community is obliged to develop, implement and adhere to precautious measures to meet the concern. END_OF_DOCUMENT_TOKEN_TO_BE_REPLACED 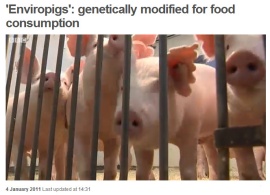 Summary of story: For the past decade, researchers at the University of Guelph, Canada, has been developing a line of Yorkshire pigs now known as Enviropig. In January 2011, a BBC reporter had the opportunity to see the pigs in a research facility while applications to approve the Enviropig for human consumption were being deliberated by the US Food and Drug Administration. The Enviropig has been genetically modified to contain genes from Escherichia coli and mice and bred over several generations to become more environmentally friendly by reducing the toxicity of their waste.

Discussion of ethical issues: Development of the Enviropig raises a number of ethical questions. Some of these relate to issues of animal rights, some relate to genetic modification of organism in general and foods in particular. Given the reasons behind the investment in the Enviropig research, there are also specific issues relating to environmental ethics, and this represents a good place to begin evaluation.

Intensive pig farming produces large amounts of manure which contains high levels of phosphate. Whilst some phosphate is vital to life, and is necessary for good plant growth, high concentrations can lead to disruption and poisoning of ecosystems. Runoff from pig farms can lead to eutrophication of nearby water ecosystems, which can potentially lead to the water becoming anoxic and unable to support life (University of Guelph, 2011). Enviropig has been genetically modified to produce phytase in its saliva. This enzyme is important for the breakdown of phytic acid, an indigestible form of phosphorus commonly found in cereal-based foodstuffs. Bacteria in the guts of cattle and other ruminants, but not pigs, normally provide this enzyme allowing this dietary phosphate to be released and used by the mammal. END_OF_DOCUMENT_TOKEN_TO_BE_REPLACED

Summary of story:   Scientists from the Universities of Edinburgh and Cambridge have created genetically modified chickens that are unable to transmit the H5N1 “bird flu” virus between individuals. This effect was generated by inserting genetic information coding for a ‘decoy’ RNA hairpin molecule that acts as an inhibitor for the RNA polymerase enzyme required for replication of the flu virus (Lyall et al, 2011). It has been suggested that this approach may offer a means to reduce the extent to which bird populations act as a reservoir for flu and other diseases.

Discussion of ethical issues:  This story presents ethical tension on two levels; the possible benefits and complications for the chickens themselves, but also the implications for the human population. Laws relating to the use of Genetically Modified Organisms (GMOs) vary in different parts of the world. In the UK, the law covering the creation and use of GMOs is set out by the Health and Safety Executive. This requires any experimentation to undergo strict risk assessment, notification of the authorities regarding any GM activity, and total clarity and public availability of information gathered by the research (HSE, 2011). In this case, Sang and her team at the Roslin Institute, Edinburgh have complied with these regulations and the necessary details are included in the final paper (Lyall et al, 2011). END_OF_DOCUMENT_TOKEN_TO_BE_REPLACED

We have recently published the latest of our videos on bioethics. The subject this time is the use of model organisms in biomedical research (it last six and a half minutes). I am particularly please about this one as it is the first of two main films that have been at the core of a project supported by the Biotechnology and Biological Sciences Research Council (the other film, due for completion shortly, is on Comparative Genomics).

For reasons I needn’t go into these videos have had longer gestation than a baby elephant but we are very pleased with the outcome and hope you will agree that they have been worth the wait. In the fullness of time there will also be some structured suggestions for how to use these videos in a teaching context.

Production of the two main videos has resulted in the release of seven further films as side-product of the project. These have been previously mentioned on this site, see here for a list.

For a while now I’ve been working with a couple of colleagues at the University of Leicester to produce some videos about the use of model organisms in research. The “big film” is still in gestation, but the project has generated a number of other videos which are now available on YouTube.

The most recent 3-minute video features the research of Dr Flav Giorgini and his team. In particular, the film focuses on their work involves the use of yeast (Saccharomyces cerevisiae) and fruit flies (Drosophila melanogaster) to improve our understanding of the fundamental processes involved in Huntington’s Disease and other neurodegenerative diseases.

It is our hope that videos of this kind will help explain the relevance of work on other species, and especially, lower organisms. We would value any comments you have about the film and especially its potential as a teaching tool.

Other videos already available as part of this series include:

The production of these videos has been supported by the BBSRC and GENIE, the Centre for Excellence in Teaching and Learning about Genetics

In Make me… stay awake, the final part of an engaging series of three documentaries (following Make me… smart and Make me… live forever), Michael Mosley investigates the effects of sleep deprivation and ways in which these symptoms may be alleviated. As he puts it in the introduction to the film, he wants to know if there are ways of “conquering… my need and my urge for sleep” (01:40).

Several sections of the programme brought bioethical themes into sharp focus – including the use of model organisms in research (17:53-20:47) and the use of drugs to stay awake longer (26:42- end).

END_OF_DOCUMENT_TOKEN_TO_BE_REPLACED

Blood & Guts – A History of Surgery: Spare Parts is the third part of the BBC Four documentary series about the “brutal, bloody and dangerous history of surgery” focusing on the development of transplant surgery. The documentary primarily gives a graphic account of the history of transplant surgery, in particular focusing on the work of Alexis Carrel (00:04:24 – 00:22:47),  Joseph E. Murray (00:22:47 – 00:45:32) and Sir Roy Calne (00:36:40 – 00:45:32). However both at the beginning (Start – 00:04:24) and the end of the programme (00:45:32 – End) Michael Mosley (Also seen in BBC’s documentary series Medical Mavericks) discusses some of the ethical concerns that may arise from transplant surgery. Mosley meets with two patients who have both had a hand transplant, however only one of the patients is able to keep his new hand as it illustrates the success and failure of the radical surgery. 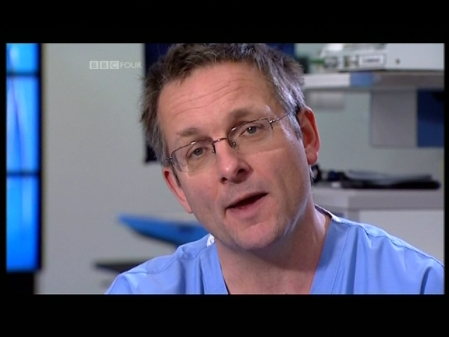 Michael Mosley (00:02:00 - 00:04:24): "I'm really intrigued by David (patient because to me this is something more than just incredible surgery. The whole idea of living with a dead man's hand is one I find fascinating but also disturbing. A lot of people I've talked to are really freaked by the idea of having something like an arm transplant, its also true frankly of all the buts of the body that show like; noses, eyes, and faces probably the freakiest of them all. No other form of surgery impacts on our sense of self in quite the way transplants do. There is something profoundly strange about swoping body parts, melding your flesh with others. And these days there seems to be no limits."

END_OF_DOCUMENT_TOKEN_TO_BE_REPLACED

Michael Mosley: “The heart possesses a mystique, a romance that sets it a part from any other organs. This difference helped make heart surgery an extremely dangerous procedure. Not just for the patient but also for any surgeon prepared to operate on it.”

END_OF_DOCUMENT_TOKEN_TO_BE_REPLACED

BioethicsBytes
Create a free website or blog at WordPress.com.