It is a well established truth that not all of our genes are switched on in all of our cells all of the time. A fundamental role in the control of gene expression is played by transcription factors encoded within the DNA itself. In addition to this, however, there is now increasing recognition of the importance of an additional layer of genetic modification over and above the sequence of A,C,G&T letters in genome. 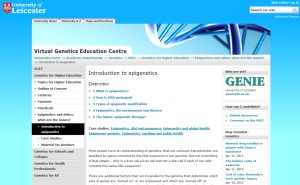 This “epigenetic” regulation can be influenced by environmental factors and hence questions about the ethical significance of epigenetics are emerging. Two different resources for looking at these bioethical dimension of epigenetics have recently been launched.

Firstly, PhD student Lyndsey Wright has taken the lead in the developed a series of resources on epigenetics and ethics which can be used with A-level students and undergraduates.

Four case studies are included on:

The resource, which is part of the wider Virtual Genetics Education Centre, includes teachers’ notes, student worksheets and PowerPoint presentations as well as links to further reading.

The second new resource is a video on the science and ethics of epigenetics.

The video includes consideration of Jesus and his (fictional) twin Joshua

This film was made by second year undergraduates at Leicester as an assessed piece of work. The video includes interviews with a number of scientists who are researching aspects of epigenetics, including the role of genetic modification in altering the expression of genes in cancerous cells.

This entry was posted on Friday, April 12th, 2013 at 3:49 pm and is filed under Epigenetics, Online clips, Streamed video. You can follow any responses to this entry through the RSS 2.0 feed. You can leave a response, or trackback from your own site.