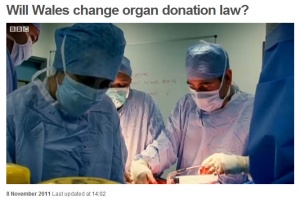 Summary of story: The Welsh government’s has published a White Paper Proposals for Legislation on Organ and Tissue Donation: A Welsh Government White Paper in which they outline their intention to change the law regarding organ donation. In keeping with the rest of the UK, Wales current has an “opt-in” system, in which a person has to actively indicate (e.g. by signing organ donor register) that they give consent for their organs to be used by the NHS. Under the proposed system of presumed consent, all adults resident in Wales will automatically be placed upon the register; if anyone wishes to withdraw their consent they must actively remove themselves from the list. Many countries already operate this “opt-out” system; including, in Europe, such countries as France, Spain, Austria, Belgium, Norway and Sweden. In the news coverage, Glyn Davies MP state his opposition to the proposal, highlighting concerns about both the efficacy of the new system, and whether adequate consideration will be given to ethical aspects of the change.

Discussion of ethical issues: One ethical argument against presumed consent suggests that it violates the patient’s right to make an informed decision, and so does not uphold respect for their autonomy (Gillon, 1994). The specific purpose of informed consent is to protect a patient’s right to autonomy, as made clear by both the Universal Declaration on Bioethics and Human Rights (UNESCO, 2005) and the Declaration of Helsinki (World Medical Association, 2008). Enforcing presumed consent would remove the need for informed consent, and as such would be “a violation of an individual’s autonomy” (Kurosu, 2008).  Presumed consent, it is argued, forces patients either to become donors, or to state their wish to not become donors; in both instances the patient’s autonomy is violated, as  “compelling patients is unethical” (Kurosu, 2008). This deontological argument suggests a move to presume consent in Wales would be intrinsically unethical. Similarly, Kennedy et al. (1998) consider that a government body “assuming possession of our body parts” would be “a step too far”.

This position is not universally accepted. Watson (2003) questions the intrinsic wrongness of presumed consent, suggesting it would actually increase autonomy by removing the current emphasis place on family members to decide, leaving it solely up to the individual. This view does not entirely align with the Welsh model, where the government have suggested a “soft option” which allows family members to override the decision of the deceased.

Others also maintain that presumed consent speaks “in favour” of autonomy (Gill 2004), proposing a utilitarian argument centred on the “fewer mistakes claim”. Under the current opt-in system the most likely mistake will be non-removal, i.e. a willing donor being buried without their organs being removed. In an opt-out model the most likely mistake will be wrong removal, i.e. a patient opposed to donation having organs removed).

In Gill’s reasoning, people who hold strong views in opposition to organ donation are more likely to actively express their wishes whereas people who may be in favour under the current scheme don’t get around to formalising their intentions. Hence, on balance, more mistakes are made with opt-in legislation than with opt-out schemes. It is certainly true that many individuals supporting organ donation do not sign the register; Welsh Health Minister Lesley Griffiths stated that in the year 2010 “67% of donors were not on the organ donor register” and that despite the overwhelming majority supporting organ donation, only 1 in 3 Welsh people have signed the register (BBC News, 2011). Implementation of presumed consent, which would limit mistakes to mistaken removals, will lead to a decrease in the number of overall mistakes, and will maximise the number of deceased individuals having their wishes met.

It is an important aspect of Gill’s argument that both forms of mistake are regarded as equally unethical. This, however, may not be a legitimate assumption. It can be argued that a mistaken removal constitutes a greater violation of the patient’s autonomy as it is an active violation of their wish, in which the government commits an unethical act without the patient’s consent, as opposed to a mistaken non removal, where the violation would be a passive failure to act upon the patient’s wish.

Gill also noted that if the majority of the population believe in organ donation, presumed consent would mean only a minority are affected by mistakes, whilst the wishes of the majority are met. In Wales 90% of individuals are in favour of organ donation, so implementation of presumed consent would limit mistakes to occurring within a minority of 10% (NHS Blood and Transplant, 2003).

Many utilitarian perspectives assume presumed consent is effective. This includes the argument proposed by Watson (2003), who states that presumed consent “harms none, and benefits many”. However, in the news story, Glyn Davies MP questions this, stating that the efficacy “just isn’t there.” Kieran Healy, a sociologist, shares this view, suggesting that proven links between the implementation of presumed consent and an increase in rate of organ donation (Gimbel et al., 2003) are due to “effective management of the transplant system, not a
simple legal rule” (Harris et al., 2010).

Although Davies distinguishes between efficacy and ethicalness, in reality the two are closely linked. If presumed consent can be shown to increase donation rates, it may shift the ethical debates in favour of a change of the law in Wales.

Abadie A. and Gay S. (2006) The impact of presumed consent legislation on cadaveric organ donation: a cross-country study. Journal of Health Economics 25:599-620.

Kurosu M. (2008) Ethical Issues of Presumed Consent in the Use of Patient Materials for Medical Research and the Organ Donation for Transplantation. Journal of Philosophy and Ethics in Health Care and Medicine 3:64-85.

Headline Bioethics Commentaries are short articles on the bioethical issues raised by a story in the news. The articles are authored by second year undergraduates at the University of Leicester (UK). A printable version of this article is available via this link.

This entry was posted on Wednesday, January 9th, 2013 at 4:54 pm and is filed under Headline Bioethics, Human tissue usage, News story, Online clips, Streamed video, TV (documentary). You can follow any responses to this entry through the RSS 2.0 feed. You can leave a response, or trackback from your own site.