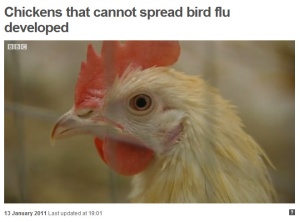 Summary of story:   Scientists from the Universities of Edinburgh and Cambridge have created genetically modified chickens that are unable to transmit the H5N1 “bird flu” virus between individuals. This effect was generated by inserting genetic information coding for a ‘decoy’ RNA hairpin molecule that acts as an inhibitor for the RNA polymerase enzyme required for replication of the flu virus (Lyall et al, 2011). It has been suggested that this approach may offer a means to reduce the extent to which bird populations act as a reservoir for flu and other diseases.

Discussion of ethical issues:  This story presents ethical tension on two levels; the possible benefits and complications for the chickens themselves, but also the implications for the human population. Laws relating to the use of Genetically Modified Organisms (GMOs) vary in different parts of the world. In the UK, the law covering the creation and use of GMOs is set out by the Health and Safety Executive. This requires any experimentation to undergo strict risk assessment, notification of the authorities regarding any GM activity, and total clarity and public availability of information gathered by the research (HSE, 2011). In this case, Sang and her team at the Roslin Institute, Edinburgh have complied with these regulations and the necessary details are included in the final paper (Lyall et al, 2011).

However, the basis of the work itself brings up many ethical issues. Some people argue on principle that genetically modifying an animal is ‘against nature’. The process of gene insertion is changing the genetic information and therefore fundamentally altering the organism.  In addition, although it does bring benefit to the health of the chickens, the research is primarily intended to benefit humans and the cost to animals may be unjustified given that only about 300 humans worldwide are known to have been killed by the H5N1 virus (Mackenzie, 2011).  Again, some people believe that modifying animals for our own benefit is unacceptable. Furthermore, although this gene alteration may be justified for deadly diseases, the suggestion that it could be extended to other species and/or other less potent diseases hints at a possible ‘spiralling’ effect whereby genetic modification becomes commonplace. According to a “slippery slope” argument, it may therefore be difficult to draw the line where GM is stopped.

The methods used to prove the success of the experiment also raises issues due to the death of some non-GM chickens who were allowed to come into contact with H5N1 to act as a ‘control’ for the experiment. Animal welfare is an ongoing issue, since informed consent cannot be achieved in the way it might be for human trials. It has previously been suggested that problems with avian flu spread amongst commercial flocks can be drastically reduced with simple biosecurity protocols such as limiting cross-flock trading and alleviating cramped living conditions (Capua and Marangon, 2007). This would render this line of research unnecessary.

The use of these scientific innovations could create economically sustainable livestock and poultry but they may be out of reach for developing countries since, with current techniques, it would cost an initial outlay of around £50,000 to produce only a small group of chickens to start breeding from (Hughes, 2011). Out-pricing of discoveries, often those of considerable medical importance, has been a recurring theme in less privileged countries. Denying farmers access to these healthier and sustainable animals could be seen as unfair and unjust.

On another angle, there has long been fear amongst the public regarding GMOs, with the media frequently publishing scare stories on the subject, including referring to them as ‘Frankenstein Foods’. Whilst there is no evidence for unwanted side effects, concern remains and cannot be completely disproved.  In some senses this is simply the nature of science, you cannot “prove” anything, but it could be argued that it would be unethical to convince the public otherwise.

On the other hand, giving in to, potentially misinformed, public pressure might be seen as immoral itself, since it may be haltering developments that could offer a solution to the crisis of food supply in a rapidly growing population, with access to food being regarded as a basic human right (Cooke, 2008). A utilitarian view would suggest that the sacrifice of a small number of chickens would be hugely outweighed by the potential advantages for the ‘greater good’.

Although the use of genetic modification for these chickens could provide a short-term solution to the endemic spread of H5N1 bird flu amongst commercial populations, it is important to remember that there will always be a reservoir for the disease in wild bird populations. This may be less of a problem if the method is applied to other diseases, for example swine flu in agricultural pig populations, as they are far less likely to come into contact with any wild population reservoirs.  However in both cases, many virologists feel that due to the rapidly evolving nature of the influenza virus, these developments will be counteracted by mechanisms evolved by the virus to achieve new methods of transmission. This could result in an even more virulent strain of the disease which would, in a very real sense, be of our own making. The responsibility of the power we have as humans to manipulate other organisms must be used with care and accountability to prevent such a catastrophic event.

Headline Bioethics Commentaries are short articles on the bioethical issues raised by a story in the news. The articles are authored by second year undergraduates at the University of Leicester (UK). A printable version of this article is available via this link.

This entry was posted on Friday, January 4th, 2013 at 10:14 am and is filed under Animal experimentation, GMOs, Headline Bioethics, Online clips, Streamed video, Transgenic animals, TV (documentary). You can follow any responses to this entry through the RSS 2.0 feed. You can leave a response, or trackback from your own site.