Evaluating medicines – the appliance of science?

The BBC has a four part series featuring Professor Lesley Regan (from the Dept of Obstetrics and Gynecology at St Mary’s Hospital) as she probes the scientific validity of various health and beauty products. At the time of writing, Prof Regan has investigated the diet industry and over the counter medicines (the subject of this post). Future episodes are to look at children’s products and tbc.

The second episode Prof essor Regan’s Medicine Cabinet (first transmitted on BBC2 at 9pm on Thursday 23rd April 2009, and available on iPlayer until 14th May) contained several valuable sections for use in teaching about the evaluation of pharmaceutical products, and about the scientific method in general. 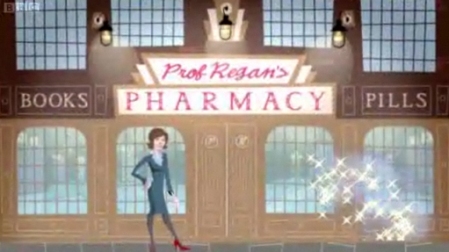 Which remedies will make into Prof Regan's scientifically-tested Pharmacy?

The last section, on health checks, includes some interesting discussion on the ethics of genetic tests offered by companies such as deCODEme . For example, what is the merit of taking a test reporting to tell you that you are at a high risk of Alzheimer’s Disease if there is no treatment available? Genetic tests of this type have been discussed elsewhere on bioethicsbytes (e.g. Visions of the Future and The Killer in Me), so we will focus here on other aspects of the programme.

In a classroom setting, the most useful take-home messages relate to the nature of scientific evidence. At 00:10:30 we are introduced to Prof Regan’s three golden rules for the scientific merit of a study: (1) is it published in a reputable scientific journal? (2) does it involve sufficiently large numbers of patients to achieve statistically significant data? (3) has it involved comparision of the treatment against another approved therapy or a placebo?

This series of rules is offered after she discusses homeopathy with Tony Pinkus of Ainsworths, a leading homeopath. He suggests that the lack of scientific evidence for such remedies is caused by inadequacies in science not homeopathy: “Science hasn’t caught up with homeopathy… we don’t have the wherewithall in science as it is today”. Prof Regan points out at the dilution levels (30 times through a sequence of  at 1 part active ingredient into 99 parts alcohol is standard) would mean that there is a very low possibility that there is even one molecule of the active compound in the bottle.

As part of the programme two small-scale scientific trials are undertaken. The first (00:13:30-00:17:30) involves giving a set of insomniacs sugar bills to trial. Regan’s pseudoscientific babble to add gravitas to the medicine is fantastic – she stresses the dire importance, for example, of not using toothpaste within 30 mins before taking the tablets. I did feel sorry for the patients who had reported the efficacy of the new drug in glowing terms before Prof Regan revealed that they were just cake decorations; are they now back to restless nights?

The second experiment is worthy of greater attention, and might make a nice clip to show regarding the “How Science Works” strand of new GCSEs and A level courses. As part of  a discussion on branded v generic painkillers (00:17:30-00:27:00), Regan conducts a standard pain-endurance test involving keeping a limb immersed in ice-cold water (starts 00:19:30). Several players from Chiswick Rugby club take name-brand painkillers such as Nurofen or Anadin and see how long they can keep their arm in the water.

They then repeat the process using pills from unlabelled brown bottles. Believing these are generic versions (own-label ibuprofen, etc), they can only keep their arms in the water for shorter periods of time. It is useful to stop the video at 00:24:29, before a twist is revealed, and ask whether this is an appropriate scientific investigation. Sharp students may observe that this is not a fair test because the men knew what they were taking. Running the clip on reveals the trick – the drugs in the unlabelled bottles were actually exactly the same as the pills they had taken previously. This is used as evidence that the appearance of branding can have an impact on the efficacy of medicine.

Now, although there is apparently some evidence that brand name medicines can be recorded as being better than generics (a study from Keele University is mentioned) – I would nevertheless want to get a class of students to consider why this is STILL not a good experiment. Here are some of my observations in this regard:
– the cohort is very small (maximum of about 8 players shown, but only 3 or 4 in the footage of the actual test and each only does one medicine).
– trial only done once
– in all cases the order was brand name then generic, whereas the order should have been varied. This is important since…
– in all cases the arm exposed to the iced water had already been submerged in icy water for a period only shortly beforehand
– there was no indication that the subjects had been given time for the original medication to clear from their system
– I’m sure there are plenty more

So, unfortunately the desire for a telly-visual experiment has actually left the programme model a semi-scientific study of exactly the type it has set out to debunk.

Professor Regan’s Medicine Cabinet was first shown on BBC2 at 9 pm on Thursday April 23rd. It is available on iPlayer until 14th May 2009. Members can obtain copies for educational use from the BUFVC quoting TRILT code (00F0BD8B).

This entry was posted on Monday, April 27th, 2009 at 1:46 pm and is filed under Streamed video, TV (documentary). You can follow any responses to this entry through the RSS 2.0 feed. You can leave a response, or trackback from your own site.

2 Responses to Evaluating medicines – the appliance of science?