The most recent episode of Holby City is available to view of download on via the BBC iPlayer.

Following on from the recent BioethicsBytes post Holby City – “If you can’t look after yourself, then why should we?” (published on January 21 2009; updated February 4th 2009), which concerned ethical issues in NHS resource allocation as highlighted by two episodes of the BBC1 drama Holby City, this update post covers events in more recent episodes of Holby City – including the denouement to the storyline, as depicted in Feet of Clay.

The storyline concerns the “zero tolerance” policy implemented by Head of Surgery, Dr Ric Griffin (Hugh Quarshie), who is refusing to authorise surgical procedures for patients whose lifestyle choices may have contributed to their illness. Previous posts have covered the instigation of this policy in the episode Just (first broadcast on BBC1 on January 20 2009, at 20.00; TRILT Identifier: 00D15A4E),  and the events and debates this creates between the characters in Tough Love (first broadcast on BBC1 on February 3 2009, at 20.00; TRILT Identifier: 00D8E505). This post notes relevant events in the subsequent episodes Trust, Truth and Mercy, and Take Her Breath Away, and the closure of the storyline in Feet of Clay.

Frankie Moore is brought into Keller Ward with breathing difficulties

Following on from Ric Griffin’s refusal to authorise a hernia operation for an obese man in the episode Just, Trust features a storyline involving the man’s son, Frankie, who is brought in with breathing difficulties (00:10:03 to 00:11:14). Given that Frankie is also overweight, Griffin has to choose whether or not to treat him. He elects to perform the necessary surgery in this case, since the procedure is now an emergency rather than elective one (00:14:25 to 00:16:04). However, following the sucessful surgery, Griffin and colleague Connie Beauchamp (Amanda Mealing) discuss the implications of his weight with Frankie and persuade him to lose weight (00:47:54 to 00:48:31).

Griffin presents Frankie with a draft of the leaflet

Take her Breath Away 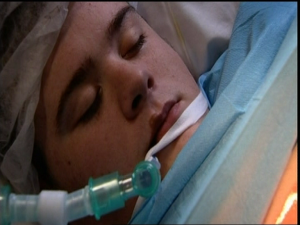 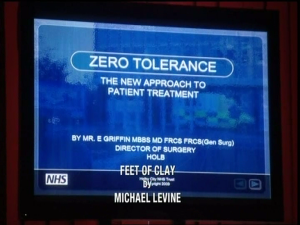 Ric Griffin prepares to present his zero tolerance policy to the hospital board of trustees.

Although Feet of Clay can be considered the closure of this storyline, it is likely that echoes of it will continue throughout this series of Holby City. Overall, the bioethical issues discussed in these additional episodes are very similar to those identified in the previous post on this storyline. These episodes develop the themes and illustrate some of the implications of zero tolerance within healthcare.

Additional issues centre on the experience of obesity and how is it perceived and dealt with within healthcare and family settings (most notably via Frankie and his father). Further, these episodes also provide a number of quotes which can be used to summarise pro- and anti- clinician perspectives, and also that of the patient.

This entry was posted on Monday, March 30th, 2009 at 2:10 pm and is filed under Clinical ethics, Holby city, Lifestyle & genetic disease, TV (fiction). You can follow any responses to this entry through the RSS 2.0 feed. You can leave a response, or trackback from your own site.