Blood & Guts – A History of Surgery: Spare Parts is the third part of the BBC Four documentary series about the “brutal, bloody and dangerous history of surgery” focusing on the development of transplant surgery. The documentary primarily gives a graphic account of the history of transplant surgery, in particular focusing on the work of Alexis Carrel (00:04:24 – 00:22:47),  Joseph E. Murray (00:22:47 – 00:45:32) and Sir Roy Calne (00:36:40 – 00:45:32). However both at the beginning (Start – 00:04:24) and the end of the programme (00:45:32 – End) Michael Mosley (Also seen in BBC’s documentary series Medical Mavericks) discusses some of the ethical concerns that may arise from transplant surgery. Mosley meets with two patients who have both had a hand transplant, however only one of the patients is able to keep his new hand as it illustrates the success and failure of the radical surgery.

Michael Mosley (00:02:00 - 00:04:24): "I'm really intrigued by David (patient because to me this is something more than just incredible surgery. The whole idea of living with a dead man's hand is one I find fascinating but also disturbing. A lot of people I've talked to are really freaked by the idea of having something like an arm transplant, its also true frankly of all the buts of the body that show like; noses, eyes, and faces probably the freakiest of them all. No other form of surgery impacts on our sense of self in quite the way transplants do. There is something profoundly strange about swoping body parts, melding your flesh with others. And these days there seems to be no limits."

One of the central ethical arguments when discussing transplantation of external limbs or features, is one of self identity and psychological preparation. The following section will be useful when discussing this topic (00:45:32 – End). 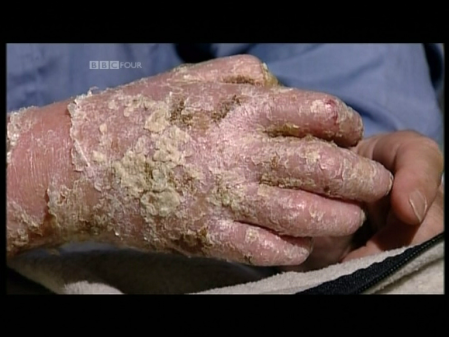 Clint's deteriorating hand after his immune system rejects it

Clint Hallam underwent the world’s first hand transplant in 1998 at the Edouard Herriot Hospital, Lyon France (00:45:31 – 00:52:40).  However after initial success Clint pleaded with surgeons to remove his new hand, because immune rejection had caused his hand to become intolerable to live with. At first Clint describes his new hand as a “miracle”. However Clint continues: “One of the hard things to accept for me, is that I’m almost more handicapped with my new hand, then when I just had one and half hands” (Independant News article ‘ I hate my new hand’). Clint found it very hard to adapt psychologically to his new hand and had also began to feel ill, believing that his anti-rejection drugs were making him worse. Clint stopped taking his medication leaving his immune system to reject his new hand – eventually leading to surgeons removing it (BBC News article ‘ Surgeons sever transplant hand’).

Michael and Clint discuss issues such as: Clint’s feelings about the hand originated from a dead person; Clint’s anger that the doctors did not match the size and shape of the donor hand; and about being the first patient to try such radical surgery.

Michael Mosley: “I am fascinated by Clint’s story because in him we can see the terrible contradictions of cutting edge surgery. There is the fame and glory at least for the surgeon for going first. However there is the often appalling cost to the patients of being first.”

In contrast David Savage ,who lost his hand 32 years prior to having a hand transplant in 2006, has so far had a much more positive outcome (00:52:40 – End). Michael Mosley discusses some issues about David’s new hand: how different it looks and the consideration that it may have been donated by a woman. However despite these concerns both David and his wife are very optimistic about his new hand, with his surgeon believing that his personality is the reason behind his success. 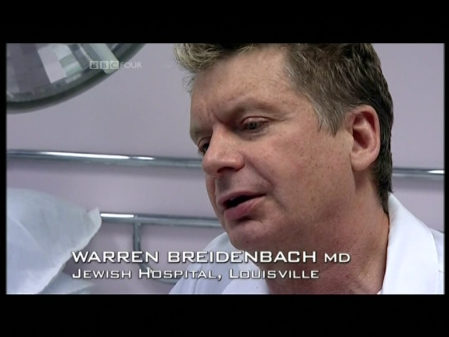 Dr Warren Briderbach - David Savage's doctor: "We say this all the time in hand surgery. It does no good to have only a a good surgeon. If you hook up everything probably and the patient goes home, doesn't use the hand, doesn't do the physiotherapy, you get a lousy result. It is extremely important the physiotherapy and cooperation, that's where he has been an excellent patient."

This entry was posted on Wednesday, February 11th, 2009 at 3:32 pm and is filed under Animal experimentation, Clinical ethics, Clinical trials, Curricula, Human tissue usage, Research ethics, Transplantation, TV (documentary), Uncategorized, Xenotransplantation. You can follow any responses to this entry through the RSS 2.0 feed. You can leave a response, or trackback from your own site.

One Response to Blood & Guts – A History of Surgery: Spare Parts