Holby City – “If you can’t…look after yourself, then why should we?” 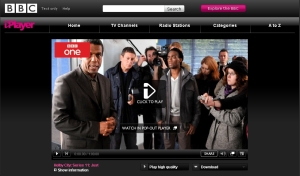 The issue of resource allocation in the NHS has cropped up several times in recent programmes (see, for example, Dom’s on the Case regarding the “postcode lottery”. The present post examines the ethical issues implicit in a different aspect of resource allocation in healthcare: the potential for conflict between traditional medical ethics and core NHS values and increasingly prominent views of the individual as both responsible and accountable for their own health status. This tension came to the fore in Just, a recent episode of the BBC drama Holby City (first broadcast on BBC1 at 8.00pm on 20th January 2009), and is captured nicely in one particular quote from the programme in which surgeon Ric Griffin challenges his patient, an obese smoker, “if you can’t be bothered to look after yourself, then why should we?” (00:38:07)

The idea that patient that have failed to take care of their own health, are somehow less deserving of treatment on the NHS – particularly where resources may be scarce – was in the news in 2002, when ex-footballer George Best received a life-saving liver transplant following liver damage due to alcoholism (as described in this article from BBC News). At the time some critics suggested that it was unfair that Best was to receive treatment given that his illness could be considered self-inflicted. It was argued that there were many other patients waiting for the same operation whose illness was not alcohol related, and that these cases were somehow more deserving of scarce donor organs (as described in this article from The Independent). Although this case was slightly more complex (in that Best’s operation took place in a private hospital), it does highlight an interesting bioethical question within NHS resource allocation.

At present the NHS operates on a system where everyone with the same condition should receive an equal level of care independently of the cause of the problem (justice in one of the four key principles on which much medical ethics is based – the others are autonomy, beneficience and non-maleficence. See this entry on Principlism for more details).

The NHS intends to provide all equivalent patients with the same level of care and  treatment, and the same level of resource allocation by healthcare funders. However, given that resources are finite, decisions have to be made about how to distribute these fairly. How is this fairness to be achieved? Was it fair that George Best received a transplant that could have gone to another patient whose disease was not ‘self-inflicted’? Or, would it be unethical for doctors to have denied treatment to Best on the basis that he should have taken more responsibility for his own health prior to his illness? 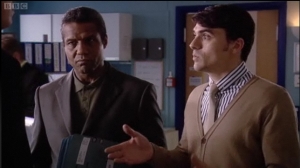 These are some of the questions addressed in this episode of Holby City. The show depicts these issues through two cases that arrive in the fictional hospital. The first is a case of an obese man needing surgery, and the second is of a drug addict requiring treatment. In each case the doctors involved debate the issues around the ethics of providing or withholding treatment on the basis of the patients’ individual responsibility for their condition. 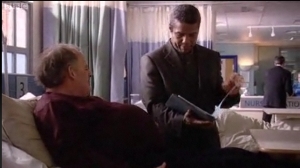 In the scenario developed in Holby City, a male patient of around 50 arrives on the ward needing elective surgery for a condition exacerbated by chronic obesity and smoking. The back story is that this patient had been seen by on-screen surgeon Ric Griffin on a previous occasion and been given explicit instructions to quit smoking and loose weight. Apparently the patient had made little effort to do this, and faced with having to operate on this man, Ric Griffin , questions whether or not NHS resources should be expended on a man who had failed to take care of his own health as he had been instructed. The various positions that can be taken on this issue are illustrated in the following clips: 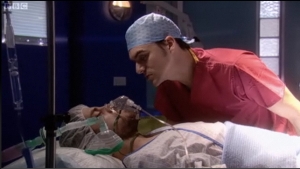 The second scenario developed in Holby City concerns a young drug addict brought into the ward needing emergency surgery. In this example a junior doctor takes a hard line with the patient, asking why he should treat him (again expending precious NHS resources) when he “just a junkie” (00:45:11). This dilemma is illustrated in the following clips:

This situation is particularly interesting given that surgeon Ric Griffin’s son was a drug addict who, within the ongoing story of Holby City, had died as a result of a heroin overdose. This adds an extra, more personal,  dimension to the problem of NHS resource allocation in cases where the patient can be seen to be responsible for their condition (a further complication of this storyline is that, prior to being brought in for surgery, the young man had stabbed a member of the hospital staff).

This post has highlighted a number of clips within this episode of Holby City that could be used to introduce and/or illustrate ethical thinking about resource allocation in the NHS. Both of the scenarios depicted in the episode provide clear and engaging summaries of the main ethical arguments in this area. It seems likely that alongside current, public and privately funded, ‘healthy living’ initiatives in the UK, ethical issues around personal responsibility for health status will become more and more prominent. Further, given the appearance of ethical issues resource allocation in UK GCSE curricula, this episode of Holby City provides a topical and timely resource in this area.

This episode of Holby City was first broadcast on BBC1 on Tuesday 20th January 2009, at 8.00pm. It is freely available on BBC iPlayer (to stream or download) until Tuesday 27th January 2009. Members of the BVFUC can obtain copies via TRILT (TRILT identifier: 00D15A4E).

This storyline was continued in the following episode of Holby City, entitled Tough Love, on February 3rd 2009 (first broadcast on BBC1 at 8.00pm). Briefly, this episode picks up at the end of Just, and features surgeon Ric Griffin formalising his unofficial policy of refusing to treat patients who had failed to look after their own health.

Tough Love was first broadcast on BBC1 on Tuesday 3rd February 2009, at 8.00pm. It is freely available on BBC iPlayer (to stream or download) until Tuesday 10th February 2009. Members of the BVFUC can obtain copies via TRILT (TRILT identifier: 00D8E505).

This entry was posted on Wednesday, January 21st, 2009 at 5:29 pm and is filed under Clinical ethics, Holby city, Lifestyle & genetic disease, Transplantation, TV (fiction). You can follow any responses to this entry through the RSS 2.0 feed. You can leave a response, or trackback from your own site.

2 Responses to Holby City – “If you can’t…look after yourself, then why should we?”