Panorama – I’ll Die When I Choose

In recent weeks a spate of stories concerning euthanasia have received prominent coverage in the British media. This post focuses on one of these, the BBC 1 Panorama documentary I’ll die when I choose. Please note that this post reports the content of the programme without, as yet, significant discussion of the ethical arguments for and against euthanasia. It is hoped that a fuller Extended Commentary giving a more rounded perspective will follow in due course.

I’ll die when I choose investigates the issues that surround assisted suicide and euthanasia. As both a MSP for the Scottish Parliament and a sufferer of Parkinson’s disease Margo Macdonald believes she can actively contribute to the debate: 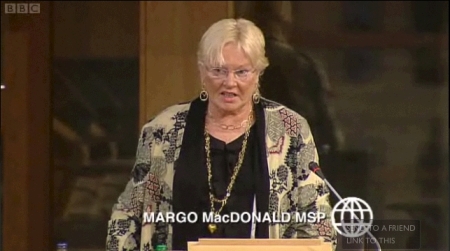 Margo Macdonald MSP: “The job that I am taking on now as a lawmaker and a journalist, is to investigate the impact of our current criminalisation of people who want assistance with dying. And although I feel that I want the right to choose, I don’t know as a society we should change the law and where we should set the limits.”

This programme provides a personal insight into the lives of some patients who suffer from deliberating diseases, while providing arguments from those that oppose any changes in the law. The current post will attempt to discuss the issues raised in this programme while making reference to other recent events associated with the subject, including Daniel James‘ assisted suicide in Zurich following a rugby accident that left him paralysed and the failed attempt in the High Court by Debbie Purdy to clarify the law on assisted suicide.

Note: The programme is both very emotional and thought provoking as it contains sensitive material. It therefore may not be appropriate for all audiences and educators are strongly advised to watch the material through themselves prior to use in any teaching setting. 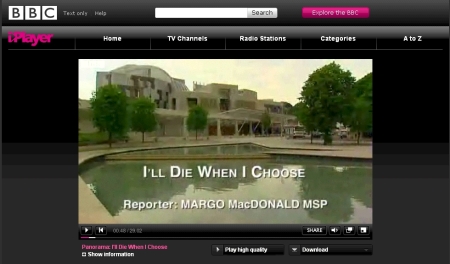 Panorama - I'll Die When I Choose

The programme begins with Margo coming face-to-face with assisted suicide (00:04:00 – 00:08:08) . Margo meets John who recalls how difficult it was to watch his mother suffer from Parkinson’s disease and how the family explored all possible future options for her. It was later revealed that his father had actively killed his mother, because her condition had became completely intolerable. His father has since died; if he was still alive he may have faced prosecution. Margo comments: “Criminalising him for an act of mercy does not seem just”, and John comments: “He (the father) saw it as a duty and as an act of love to do what he did. Not just the final part of it but the years of looking after her. He believed that the act of assisted suicide, I certainly believe that is what it was, I believe that talking to him for the months after when he lived, that is exactly why he did it, I’ve got no doubt about it.”

Margo (00:08:08 – 00:08:30): “Because this whole business doesn’t just affect John’s mother and me, we’re all living longer therefore more of us will develop degenerative conditions. And if my post bag is any thing to go by, that means that more people are considering the right to choose the exact moment of their death.” 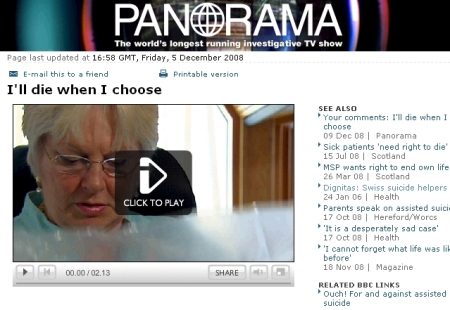 The online clips above is taken from the Panorama programme (00: 08:30 – 00:11:01) and is permanently available. It shows Margo’s reaction when she receives a ‘suicide hood’ which she had ordered for the purpose of the documentary.

Margo meets Multiple Sclerosis (MS) sufferer Valerie (00:11:01 -00:15:12). Valerie’s condition has progressed to such a level, she is actively thinking about her future options regards assisted suicide. The programme describes a clinic in Zurich Switzerland called Dignitas, which assists people to commit suicide. The system they employ is that the patient is required to lift a cup containing a lethal dose and swallow it themselves without assistance. For Valerie this is a problem; at the moment she could still carry out this act however she is not ready to die as she enjoys time with her family too much. Therefore she argues that if euthanasia was permitted then her wish could be granted when her condition causes too much of a burden for her family. Margo comments: “I can’t go with euthanasia… because I want to know that I make the decision about when it ends”, Valerie replies: “Yeah but, you still could, you could still say when. People have to go (to the clinic) when they are more able, physically, but it might be too early. So why should people have to do that, whereas if I could die here (at home).”

In 2000 the Netherlands (Holland) legalised both assisted suicide and euthanasia. Margo travels to meet a General Practice doctor to discuss the subject (00:17:15 – 00:21:14). She comments: “Well I found Nico (the doctor) very very impressive and his humanity I think is every bit as much as I had hoped to find. The thing that will stick with me is how affected Nico is, in a very genuine way, by this last action of mercy, as far as he is concerned, of kindness, of care towards patients with whom he has built up a relationship with”. Following her trip, Margo has returned with a different perspective on Euthanasia and now finds herself in support of it. 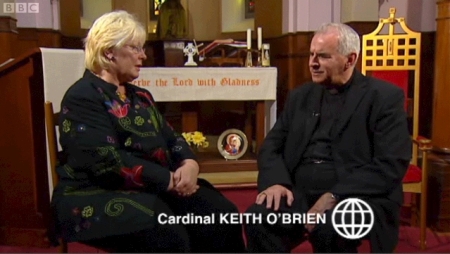 In a final section of the documentary Margo visits a friend of hers, Cardinal Keith O’Brien to discuss the issue from a religious perspective. He argues that such decisions about life and death should only be left to God to decide. Margo comments: “I don’t see the churches as been at fault in promoting what they believe. I think they are perfectly entitled to do so. But I also think that people of no faith or people who’s faith allows them to accomodate ending their own lives at a time of their choosing. I don’t think that they should be prevented from arguing their case also. And I certainly don’t think they should be criminalised.”
The programme concludes with Margo convinced that the debate about this issue must continue, as she starts the process of bringing a ‘Bill’ to the Scottish Parliament (see following online news clip – ‘Assisted suicide law change bid’).

Other online clips for teaching
The following online clips may be useful when teaching the ethics that surround both assisted suicide and euthanasia.
The news article below (BBC News – ‘Assisted suicide broadcast on TV’ . Wednesday 10th December 2008) is about Sky television’s decision to broadcast the moment of death of Craig Ewert who has decided to take his own life at the Dignitas clinic in Zurich. (Also see BBC News ‘Assisted suicide Debate’, ‘TV company defends suicide film’ and ‘Wife defends suicide documentary’.)

The following BBC News clip ‘Assisted suicide court bid fails’, describes the story of Debbie Purdy, who went to the high court to try and clarify the law that surrounds assisted suicide. 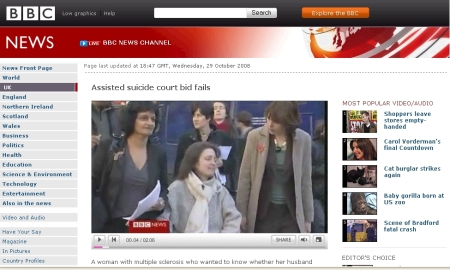 This entry was posted on Thursday, December 11th, 2008 at 5:47 pm and is filed under Clinical ethics, Euthanasia, Streamed video, TV (documentary). You can follow any responses to this entry through the RSS 2.0 feed. You can leave a response, or trackback from your own site.

2 Responses to Panorama – I’ll Die When I Choose