At a military hospital in China, Professor Guo Shuzhong is striving to advance the necessary medical techniques to complete a full face transplant for one of his patients. Celebrated as one of China’s best plastic surgeons, Professor Guo is anxious to improve the lives of people with severe facial disfigurements.

Professor Guo: "We Chinese pay a lot of attention to the face, if you have a problem with the face and go outside, a lot of people stare at you, look at you, you feel very uncomfortable... Some people are that disfigured that they do not look like human beings anymore. Some people in China call then ghosts. These patients are discriminated against in society; I deal with them every day and understand their suffering. They are in a great deal of pain. They do not expect to be beautiful after surgery, they just want a normal life again" (00:02:27 - 00:04:52).

Professor Guo believes that the only way to improve the life of his patients is to build on the well established techniques of plastic surgery and move towards partial and full face transplants. In November 2005 Isabelle Dinoire underwent the world’s first partial face transplant in France (00:12:34 – 00:13:32) (See Face transplant – Horizon). Professor Guo is encouraged by this and hopes that his research can build on the medical breakthrough.

This documentary primarily focuses on one of Professor Guo patients Li Guoxingor ‘Li’, who lives in a remote village and has been left significantly disfigured face after being attacked by a brown bear (00:14:10 – 00:17:10). Li’s brother comments: “The injury changed him; he didn’t sing and dance anymore.” In March 2006 Li travelled over 1500 miles to meet Guo, in the hope that the Professor can restore his face to normal.

Li undergoes extensive assessments by Professor Guo's colleagues to establish the best course of action for the surgery (00:17:10 - 00:22:11). Professor Guo: "We had a translator explaining the operation to him; including its risks... We waited before performing the operation. There were a few issues; the donor face would be from a dead person, some people in China believe in ghosts if he was afraid of ghosts then it would be a big problem. So before the operation I told him, it's like using someone else's old clothes to fix your own clothes."

The search for a suitable donor is particularly important and challenging since it needs to be from someone who has the same blood group, is of similar age and has a similar complexion (00:22:11 – 00:23:26). The section 00:41:44 – 00:43:04, which includes footage of Professor Guo speaking to the Chief of Emergency at his hospital about donors who have died in road traffic accidents, is also useful.

After waiting for a month for a donor, the operation gets the go ahead following the death of a 25 year old man in a car accident has died in a car accident. The operation massively exceeds the expected 7 or 8 hours and instead takes 18 hours in total (00:23:26 – 00:25:26).

Immediately after completing the operation the task is now to ensure proper post transplant care, this involves Li being given immunosuppressant drugs to prevent his body from rejecting the face transplant (00:25:26 – 00:33:15). He continued to make a good recovery and was given an opportunity to look at his face in a mirror for the first time: “When I looked in the mirror I was very happy, it was like a dream. I can’t thank Professor Guo enough, he is a great surgeon. I am honoured to have this new face, I am proud”.  Over the next fourteen months in hospital Li undergoes additional procedures to further improve his appearance, but Li explains: “The hospital treated me well, but I couldn’t get used to living there I missed my family, friends in the village and every tree in the forest”. Against medical advice Li returns home and his family embrace him unable to believe the transformation of his face (00:35:27 – 00:37:00).

The following sections of this documentary are particularly significant as they illustrate how important post-operative care is for face transplant recipients and the consequences for the patient if this is not provided (00:33:15 – 00:39:42 and 00:44:24 – End). Having a face transplant demands a life-long commitment to a strict regime of medical care to ensure the transplant is not rejected by the body. However there are three main problems for patients taking immunosuppressant drugs: infection, caused by a lowered immune system; metabolism problems, particularly insulin controlled diabetes; and increased chance of a cancerous tumours. The programme again looks to Isabelle Dinoire to illustrate the importance her post-operative care (00:37:00 – 00:39:42).

Isabelle's surgeon Bernard Devauchelle: "We ensured that the transplant would be tolerated both immunologically and psychologically by choosing the right type of patient... It's a reconstruction of the patient's morale. Even before physical reconstruction. That is how she proved her capacity to cope psychologically, which indicated to us that she was a good patient who would accept the constraints of the treatment. Ideally she would be completely independent, but she's had a treatment which under current scientific conditions is for life. We have to give her a long term follow up."

Professor Guo receives news that Li’s face transplant is being rejected by his body, and he suspects that he has stopped taking the immunosuppressant drugs (00:44:24 – End). Professor Guo travels to meet Li to try and persuade him to return to hospital so that they can monitor his condition more closely. It is established that Li has stopped taking his 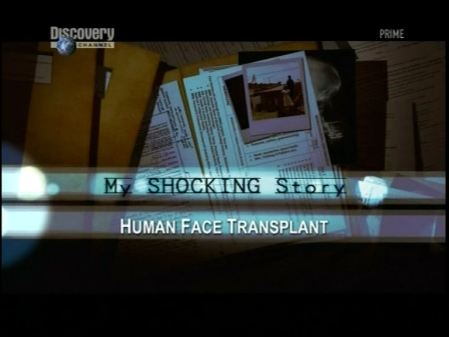 medication and instead has started to take herbal medicines which his village have used for many generations. Despite Professor Guo’s best attempts Li is adamant he will return again to the village, althuogh he promises he will continue to take his medication.

The documentary also briefly follows the story of another of Professor Guo’s patients, He Jiawei (00:04:52 – 00:07:44 and 00:39:42 – 00:44:24). He has extensive burns to his face after an act of heroism to save the lives of his fellow workers at the factory where they worked.  Unlike Li, He Jiawei wants and needs a full face transplant. However this will only happen when Professor Guo’s hospital is happy that Li’s partial face transplant was successful, including his post-operative care.   The future is uncertain for Li, as the documentary does not report whether he keeps his word and continues to take his medications. This also means that the He Jiawei’s future is unclear, as there is no indication of how long he will have to wait until Professor Guo is granted permission by his hospital to carry out the operation.

Face transplants raise many significant ethical issues for discussion. For teaching about these ethical issues the following BBC news online clip (23rd August 2008) including footage of Li Guoxing and Isabelle Dinoire, would be useful as a discussion starter complimented by the questions below. Also please refer to this BBC website for other face transplant articles. 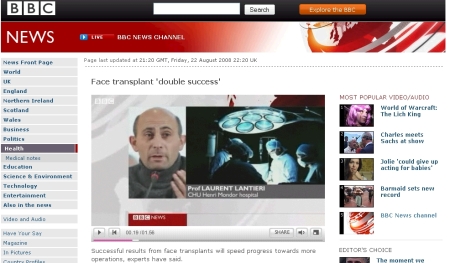 (Note: some footage may not be appropriate for all audiences)

Please note that the content of this documentary may not be appropriate for all audiences.

This entry was posted on Thursday, November 13th, 2008 at 1:47 pm and is filed under Clinical ethics, Human tissue usage, News story, Streamed video, Transplantation, TV (documentary). You can follow any responses to this entry through the RSS 2.0 feed. You can leave a response, or trackback from your own site.